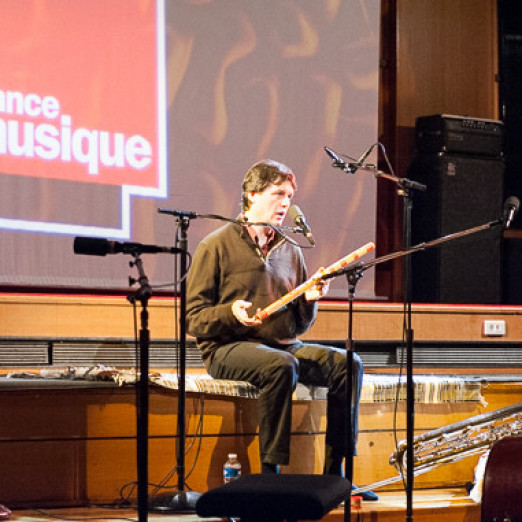 About the bansuri, the transverse flute of the North Indian Classical music…

Beside the context of North Indian Classical music, Henri Tournier is playing on a whole chromatic range of bansuri of all sizes.

The flute was designed in vedic texts under several names: venu, nadi ou nali, toonava ; however it was the word venu which was mostly used. It litterally means “bamboo” or “reed”, this was also mentioned in the Jataka (collection of stories on Bouddha’s life).
These terms with a very general connotation was used for any kind of flutes: transverse flute, straight flute, fipple flute with or without notch. In sanskrit literature, murali, synonym of vamsa, was referring to a transverse flute with holes. The murali was one of the principal iconographic attributes of God Krishna, also often called muralidhara (“The one who holds the flute”) or venugopala (“The divine shepherd with the flute”).
In North India this transverse flute is usually called bansuri: one of the many derivations of the Sanskrit word vamsa (“flute”) and the New Indo-Aryen bas (“bamboo”).
As it is played today in the North Indian Classical Music, most of the time the bansuri consists of a 28-inch flute based on the tonic note E. Its length, its large inner diameter and the surprising properties of bamboo give the instrument its characteristic deep, round and velvet tone. Made of a variety of bamboo that is found in the Assam région, it has eight holes: one blow hole, six fingers holes and one, sometimes two tuning hole towards its end. It is usually played over two octaves and sometimes three.
The instrument is not held like a Western transverse flute, or keyed flute. Instead of wrapping the left thumb and forefinger around the flute and holding it vertically with a bent wrist, here both hands are horizontal ; the flute is balanced on the end of both thumbs, and kept in position by the third and little fingers of the right hand. This position gives great freedom of movement to the fingers, which is necessary for sliding from one note to another.
Finally, accidentals are not obtained thanks to cross fingerings (a cross combination of open and closed holes), unlike the recorder or baroque flute, except in the third octave. All notes are played by closing finger holes completely or partially. This way of playing by closing holes partially of course raises major intonation and tuning problems at the beginning, but it allows the musician a great flexibility of control for microtonal inflections and melismatic playing, which are so typical of the music of India.
Pandit Hariprasad Chaurasia has raised the art of flute playing to its highest level. India has now a whole generation of flute players who are highly influenced by his style, technique and virtuosity.